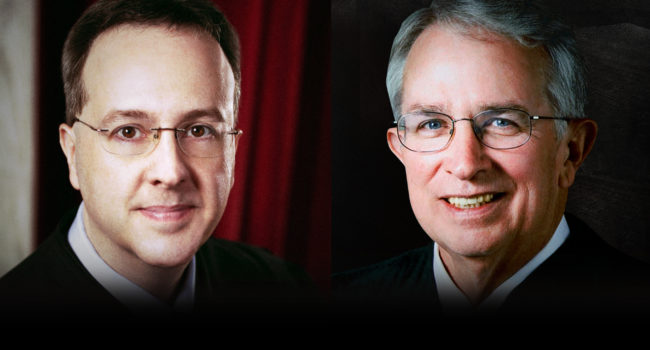 In a coincidence that sums up the current state of West Virginia politics, two Supreme Court justices appeared in separate federal courtrooms at the same time to face charges.

Former state Supreme Court Justice Menis Ketchum pleaded guilty Thursday to one count of wire fraud while his former fellow justice Allen Loughry entered a not guilty plea to an additional federal charge in connection with an ongoing federal investigation into the state Supreme Court.

Ketchum admitted to using a state-owned vehicle and a state-issued personal use for golf trips to Virginia.

He is scheduled to be sentenced Dec. 6.

Ketchum is free on $100,000 personal recognizance bond pending sentencing. The maximum sentence is up to 20 years behind bars.

At the same time as Ketchum was pleading guilty, Loughry appeared before Federal Magistrate Judge Dwane Tinsley for the third time since being indicted in June.

Loughry, dressed in a dark suit, stood beside his attorney John Carr for the hearing. It latest less than five minutes. Neither Loughry nor Carr commented as they left the courthouse. Loughry remains free on $10,000 bond.

Tinsley said Loughry’s trial remains set for Oct. 2 before U.S. District Judge John Copenhaver. Pre-trial motions are due Sept. 4, which is a week before the state Senate is scheduled to begin its pre-trial work in impeachment trials for Loughry, Chief Justice Margaret Workman and Justice Beth Walker.